Botticelli was well known in his time, but was forgotten for centuries in the wake of painters like Leonardo, Michelangelo, and Raphael. He is now seen as one of the great Renaissance painters. 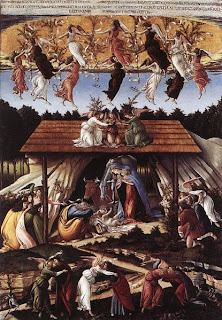 This is a painting of the birth of Jesus. In it Botticelli shows not a peaceful manger scene that most Christians were used to, but an intense struggle between angels and demons for control of the world. 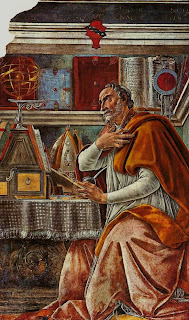 This painting is of St. Augustine. The picture shows a conflict that was important in Renaissance times. Could information about God come from knowledge, or did it have to come from God? We see Augustine surrounded by things of earthly knowledge (books, scientific equipment), but he is looking up to heaven. 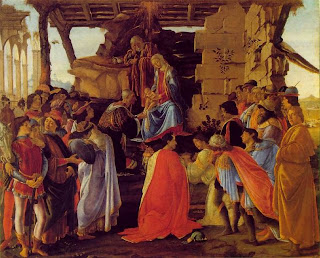 This painting, is titled The Adoration of the Magi (Magi were the wise men who went to see Jesus after his birth). In this painting, Botticelli has added members of the Medici family, who sponsered many of his works. He has also included a self portrait, on the right looking out of the painting.

Botticelli did not just paint Christian images. This painting of Venus and Mars shows amazing realism. The shadows on the face of Mars, as well as the expressions on the satyrs faces bring perspective. The imagery shows that while War (Mars) may have stopped or fallen asleep and been disarmed, Love (Venus) is still awake and alert. The image may be showing that "Love conquers All." 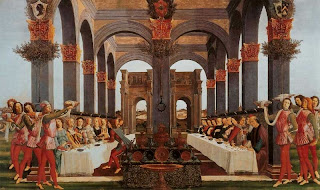 This painting is of a wedding feast between two families. This picture is the last of four, the series of which is based on a story about wasting love. It was presented a married couple as a wedding gift. The Medici family was important in making sure that the two families were married.
Posted by Mr. Kelly at 8:11 AM